Junonia coenia, known as the common buckeye or buckeye, is a butterfly in the family Nymphalidae. It is found in the United States east of the Rocky Mountains and in Mexico. Its habitat is open areas with low vegetation and some bare ground. Its original ancestry has been traced to Africa, which then experiences divergence in Asia.[2] The species Junonia grisea, the gray buckeye, is found west of the Rocky Mountains and was formerly a subspecies of Junonia coenia.[3][4] 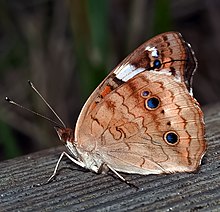 Adult butterflies feed on flowers with certain pollinator cues: yellow flowers that are 'pre-change', or flowers whose color has not been changed due to insect visitation or other factors.[12] Common buckeye caterpillars feed in isolation rather than relying upon grouping behaviors.[13] Vulnerability to the Junonia coenia densovirus is another concern for survivorship of common buckeye larvae.[14] 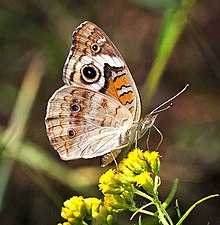 Common buckeye butterflies are colored mostly brown with some orange, black, white, blue, and magenta. The forewing features two proximal orange bars and a postmedian white band, which surrounds a prominent black eyespot and borders a smaller, more distal eyespot; both eyespots have a bluish center and each border a distal orange mark. The hindwing is mostly brown with an orange band towards the edge and a brown and white margin. It also has two eyespots, one larger and one smaller, each with a black and white outline, and a center consisting of black, blue, magenta, and orange. They also exhibit blue-green overtones on their front and sometimes hind wings. Their wingspan is typically between 2 and 2.5 inches (5 - 6.5 cm).[15]

These caterpillars have a beautiful and complex color pattern. Their backs are mostly black with light-colored markings (white, gray, beige, or brownish, varying among individuals—see picture below), their sides have white markings and red-orange spots, and they have a brown underside. They have a mostly red-orange head with black markings on the face. They have spines running lengthwise along their back and sides, as many as 7 per segment. There is also a pair of small spines on the top of their head. These spines branch out (have smaller spines coming out of them) and appear a bit shiny-blue at the base. They also have 2 pairs of tiny white spines on each segment, near the bottom. The color patterns and spine forms are less pronounced in earlier instars. There are several other species that resemble these caterpillars in appearance, such as the painted lady, the Glanville fritillary, and the red admiral, which can be easily confused by an untrained observer. They can reach 4 cm (1 5/8 inches) in length.[15]

Like the more familiar monarchs, these caterpillars pupate by spinning a silk pad on a downward facing horizontal surface, attaching themselves with their rear end, and hanging in the form of the letter J for a day or so before shedding their skin to reveal the chrysalis. The chrysalis is mostly brown with beige markings, and has a prickly texture. It has a beige band near the top, another one at the "waist" (border between thorax and abdomen), and 4 pairs of beige dots running down its dorsal side. It is 18 mm long and 8 mm wide. When touched or handled excessively, it has a habit of wiggling its abdomen.

Junio probably arose from one African colonizing ancestor. In Asia, this diverged into J. atlites, J. iphita, and J. hedonia that resembled the African ancestor. These species then diverged into J. almanac, J. lemonias, and J. villida that began to differ morphologically from African ancestors. The Taxon Pulse Hypothesis is invoked to explain the vicariance as well as dispersal exhibited by this species where there is dispersal as the species expands until they find appropriate habitats. This then allows for speciation to occur in several isolated habitats. In Junonia the species may have expanded from Africa into Asia and then from Asia throughout “Australasia, Africa, and South America.”[2] In the 1930s established populations were recognized in Cuba and the Florida Keys. In the 1940s populations migrated inland from the coast of Florida and further into the southern United States.[16]

Iridoid glycosides trigger feeding behaviors of J. coenia larvae in northern California, serving as attractants and as stimulants. It also allows for higher growth and survival rates that appear to be best promoted in the plant Plantago lanceolata, an invasive plant in California. In fact, leaves from this plant were preferred over artificial diets with just the iridoid glycosides, indicating the presence of additional sources in P. lanceolata that might play a role in food preferences. Naturally, J. coenia consider iridoid glycosides in the host plant selection for larvae. This inclination for iridoid glycosides may also reflect its role in oviposition and microhabitat selection.[5] Aucubin and catalpol are two other chemicals that can be stimulants and attractants for larval feeding behaviors.[7]

In the case of Lantana camara flowers, J. coenia preferentially feed on flowers in the yellow stage at a significantly higher rate that suggests associative learning. During early life stages, the butterfly feeds upon yellow and red flowers almost equally but over time focuses only on those flowers that are yellow and 'pre-change.' This is especially advantageous because the flower's color can be linked to its viability as well as the nectar reward that it can provide the pollinator. With this signal the pollinator can visit the right plant at the right time maximizing both its reproductive advantage as well as that of the flower. Moreover, the amount of nectar found within the flower can also influence the duration of a pollinator's visit to the plant.[12] 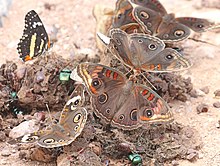 Caterpillars tend to feed individually and in isolation. For example, even in the case that multiple caterpillars are feeding upon the same plant, they will not be doing so cooperatively or based in a group dynamic.[13] Caterpillars are generally not aggressive: they do not mind each other's presence and tend to abstain from fighting when running into one another.

Common buckeyes move to the south along with tailwinds directed to the north or northwest after the cold fronts from September or October. They are sensitive to the cold and cannot spend the winter in northern regions that will experience extreme cold temperatures. However, they will migrate back from the south during the spring. It was spotted in California in late summer, early fall of 2022. [15]

The densovirus Junonia coenia infects the common buckeye larvae by focusing on targeting dividing cells in order to propagate. It consists of single stranded DNA genomes with a smooth, sphere-shaped capsid. It is from the family Parvoviridae and has been considered a potential insecticide, as is hypothesized for other one-species densoviruses. The Junonia coenia densovirus is unique in its separation of DNA strands for structural proteins versus nonstructural proteins.[14]

High intake of iridoid glycosides by J. coenia can have a negative effect on their immune response. This can then lead to higher susceptibility to parasitoids as well as a decreased ability to resist parasitism. Therefore, it is necessary to balance the chemical defense provided by these secondary metabolites with their immunological cost that correlates with increased risk of parasitism. Specifically, secondary metabolites may be hindering the immune response by operating through decreased melanization. This becomes even more problematic since parasitism is a prominent cause of mortality for caterpillars. This relationship exemplifies the vulnerable host hypothesis.[11]

Common predators of J. coenia larvae are ants, and chemical defense appears to be a strong survival mechanism for these organisms against predation. The concentration of iridoid glycoside sequestered by larvae seems to be a strong predictor for the decreased likelihood that they will be predated.[10]

In order to find a host plant for oviposition, females search for appropriate concentrations of catalpol or iridoid glycosides. Therefore, they practice drumming, which allows them to pierce the plant exterior and ‘taste’ the variety of allelochemicals that are present within its structure. This can be detected through the female J. coenia foretarsal chemoreceptors.[7]