Smilax is a genus of about 300–350 species, found in the tropics and subtropics worldwide.[1] In China for example about 80 are found (39 of which are endemic),[2] while there are 20 in North America north of Mexico.[3][4] They are climbing flowering plants, many of which are woody and/or thorny, in the monocotyledon family Smilacaceae, native throughout the tropical and subtropical regions of the world. Common names include catbriers, greenbriers, prickly-ivys and smilaxes. Sarsaparilla (also zarzaparrilla, sarsparilla) is a name used specifically for the Jamaican S. ornata as well as a catch-all term in particular for American species. Occasionally, the non-woody species such as the smooth herbaceous greenbrier (S. herbacea) are separated as genus Nemexia; they are commonly known by the rather ambiguous name carrion flowers.

Greenbriers get their scientific name from the Greek myth of Crocus and the nymph Smilax.[5] Though this myth has numerous forms, it always centers around the unfulfilled and tragic love of a mortal man who is turned into a flower, and a woodland nymph who is transformed into a brambly vine.

On their own, Smilax plants will grow as shrubs, forming dense impenetrable thickets. They will also grow over trees and other plants up to 10 m high, their hooked thorns allowing them to hang onto and scramble over branches. The genus includes both deciduous and evergreen species. The leaves are heart shaped and vary from 4–30 cm long in different species.

Greenbrier is dioecious. However, only about one in three colonies have plants of both sexes. Plants flower in May and June with white/green clustered flowers. If pollination occurs, the plant will produce a bright red to blue-black spherical berry fruit about 5–10 mm in diameter that matures in the fall.

The genus has traditionally been considered as divided into a number of sections, but molecular phylogenetic studies reveals that these morphologically defined subdivisions are not monophyletic. Subdivision is best considered in terms of clades (A–D), corresponding to biogeography, with the main divisions being Old World (clades C, D) and New World (clade B) with the exception of S. aspera, that appears to be sister to all other species (clade A) and has a tri-continental disjunction.[6]

Pantropical, extending into adjacent temperate zones to north and south. 29 species are recognized in Central America and the Caribbean.[8]

The berry is rubbery in texture and has a large, spherical seed in the center. The fruit stays intact through winter, when birds and other animals eat them to survive. The seeds are passed unharmed in the animal's droppings. Since many Smilax colonies are single clones that have spread by rhizomes, both sexes may not be present at a site, in which case no fruit is formed.

Smilax is a very damage-tolerant plant capable of growing back from its rhizomes after being cut down or burned down by fire. This, coupled with the fact that birds and other small animals spread the seeds over large areas, makes the plants very hard to get rid of. It grows best in moist woodlands with a soil pH between 5 and 6. The seeds have the greatest chance of germinating after being exposed to a freeze. 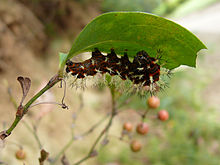 Besides their berries providing an important food for birds and other animals during the winter, greenbrier plants also provide shelter for many other animals. The thorny thickets can effectively protect small animals from larger predators who cannot enter the prickly tangle. Deer and other herbivorous mammals will eat the foliage, as will some invertebrates such as Lepidoptera (butterflies and moths), which also often drink nectar from the flowers. Beetles too are known to consume leaves.[9]

Among the Lepidoptera utilizing Smilax are Hesperiidae like the water snow flat (Tagiades litigiosa), Pieridae like the small grass yellow (Eurema smilax),[10] or moths like the peculiar and sometimes flightless genus Thyrocopa. But particularly fond of greenbriers are certain Nymphalidae caterpillars, for example those of:

Diosgenin is found in S. menispermoidea 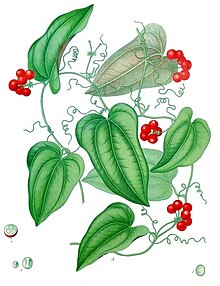 An extract from the roots of some species – most significantly Jamaican sarsaparilla (S. ornata) – is used to make the sarsaparilla drink and other root beers, as well as herbal drinks like the popular Baba Roots from Jamaica. Two species, S. domingensis and S. havanensis, are used in a traditional soda-like Cuban beverage called pru.[11] The roots may also be used in soups or stews. The young shoots can be eaten raw or cooked and are said to taste like asparagus, and the berries can be eaten both raw and cooked. Stuffed smilax pancake, or fúlíng jiābǐng (simplified Chinese: 茯苓夹饼; traditional Chinese: 茯苓夾餅), is a traditional snack from the Beijing region. S. glabra is used in Chinese herbology. It is also a key ingredient in the Chinese medical dessert guīlínggāo, which makes use of its property to set certain kinds of jelly.

The powdered roots of Jamaican sarsaparilla are known as Rad. Sarzae. Jam. in pharmacy and are used as a traditional medicine for gout in Latin American countries. Köhler's Medicinal Plants of 1887 discusses the American sarsaparilla (S. aristolochiifolia), but as early as about 1569, in his treatise devoted to syphilis, the Persian scholar Imad al-Din Mahmud ibn Mas‘ud Shirazi gave a detailed evaluation of the medical properties of chinaroot.[12]

Due to the nectar-rich flowers, species like S. medica and S. officinalis are also useful honey plants.