C. constrictor is found throughout the United States, east of the Rocky Mountains, but it also ranges north into Canada and south into Mexico, Guatemala, and Belize.

Adult eastern racers can typically vary from 50 to 152 cm (20 to 60 in) in total length (including tail) depending on the subspecies, but a record-sized specimen measured 185.4 cm (73.0 in) in total length.[4][5][6] A typical adult specimen will weigh around 556 g (1.226 lb), with little size difference between the sexes.[7] The patterns vary widely among subspecies. Most are solid-colored as their common names imply: black racers, brown racers, tan racers, blue racers, or green racers. "Runner" is sometimes used instead of "racer" in their common names. All subspecies have a lighter-colored underbelly: white, light tan, or yellow in color. Juveniles are more strikingly patterned, with a middorsal row of dark blotches on a light ground color. The tail is unpatterned. As they grow older, the dorsum darkens and the juvenile pattern gradually disappears.[4] 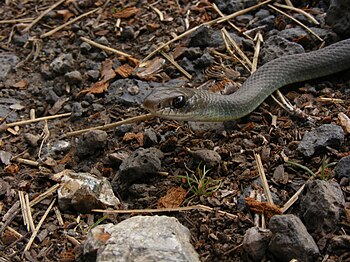 The eastern racers are fast-moving, highly active, diurnal snakes. Their diet consists primarily of small rodents, other mammals (as large as small cottontail rabbits), frogs, toads, small turtles, lizards, and other snakes.[8][9] Some subspecies are known to climb trees to eat eggs and young birds. Juveniles often consume soft-bodied insects and other small invertebrates,[10] as well as small frogs, small reptiles (including lizards and snakes and their eggs), young rodents, and shrews.[11] Despite their specific name, constrictor, they do not really employ constriction, instead simply subduing struggling prey by pinning it bodily, pressing one or two coils against it to hold it in place instead of actually suffocating it. Most smaller prey items are simply swallowed alive.

They are curious snakes with excellent vision and are sometimes seen raising their heads above the height of the grass where they are crawling to view what is around them. Aptly named, racers are very fast and typically flee from a potential predator. However, once cornered, they put up a vigorous fight, biting hard and often. They are difficult to handle and will writhe, defecate, and release a foul-smelling musk from their cloacae. Vibrating their tails among dry leaves, racers can sound convincingly like rattlesnakes.[12]

C. constrictor is found frequently near water, but also in brush, trash piles, roadsides, and swamps, and in suburbia; it is the most common snake in residential neighborhoods in Florida. It spends most of its time on the ground, but it is a good tree climber and may be found in shrubs and trees where bird nests can be raided for eggs and chicks, as well as small adult birds such as finches, canaries, and thrashers.

Most of the eastern racers prefer open, grassland-type habitats where their keen eyesight and speed can be readily used, but they are also found in light forest and even semiarid regions. They are usually not far from an area of cover for hiding.

In C. constrictor, mating takes place in the spring from April until early June. Around a month later, the female lays three to 30 eggs in a hidden nest site, such as a hollow log, an abandoned rodent burrow, or under a rock. The juveniles hatch in the early fall. A newborn is 8–10 in (20–26 cm) in total length. Maturity is reached around 2 years old. Eastern racers have been known to lay their eggs in communal sites, where a number of snakes, even those from other species, all lay their eggs together.

The northern black racer is the state reptile of Ohio.[13] 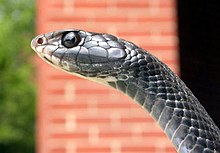