Keep your eyes open for katydids, which are all over Sarasota, but are so well camouflaged, you’ll be lucky to spot one.

Stilpnochlora couloniana, the giant katydid, is a species of phaneropterine katydid in the family Tettigoniidae.[1][2][3][4] They are sometimes kept as pets. 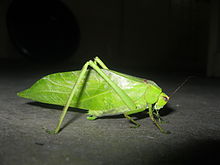 Insects in the family Tettigoniidae are commonly called katydids (especially in North America),[1] or bush crickets.[2] They have previously been known as "long-horned grasshoppers".[3] More than 8,000 species are known.[1] Part of the suborder Ensifera, the Tettigoniidae are the only extant (living) family in the superfamily Tettigonioidea.

They are primarily nocturnal in habit with strident mating calls. Many species exhibit mimicry and camouflage, commonly with shapes and colors similar to leaves.[4]

The family name Tettigoniidae is derived from the genus Tettigonia, first described by Carl Linnaeus in 1758. In Latin tettigonia means a kind of small cicada, leafhopper;[5] it is from the Greek τεττιγόνιον tettigonion, the diminutive of the imitative (onomatopoeic) τέττιξ, tettix, cicada.[6][7] All of these names such as tettix with repeated sounds are onomatopoeic, imitating the stridulation of these insects.[8] The common name katydid is also onomatopoeic and comes from the particularly loud, three-pulsed song, often rendered "ka-ty-did", of the nominate subspecies of the North American Pterophylla camellifolia, whose most common English name is the common true katydid.[9][10] 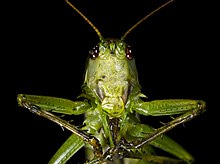 Tettigoniids range in size from as small as 5 mm (0.20 in) to as large as 130 mm (5.1 in).[11] The smaller species typically live in drier or more stressful habitats which may lead to their small size. The small size is associated with greater agility, faster development, and lower nutritional needs. Tettigoniids are tree-living insects that are most commonly heard at night during summer and early fall.[12] Tettigoniids may be distinguished from the grasshopper by the length of their filamentous antennae, which may exceed their own body length, while grasshoppers' antennae are always relatively short and thickened. 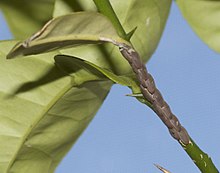 Katydid eggs attached in rows to a plant stem

Eggs are typically oval and may be attached in rows to plants. Where the eggs are deposited relates to the way the ovipositor is formed. It consists of up to three pairs of appendages formed to transmit the egg, to make a place for it, and place it properly. Tettigoniids have either sickle-shaped ovipositors which typically lay eggs in dead or living plant matter, or uniform long ovipositors which lay eggs in grass stems. When tettigoniids hatch, the nymphs often look like small, wingless versions of the adults, but in some species, the nymphs look nothing at all like the adult and rather mimic other species such as ants, spiders and assassin bugs, or flowers, to prevent predation. The nymphs remain in a mimic state only until they are large enough to escape predation. Once they complete their last molt (after about 5 successful molts), they are then prepared to mate.[12]

Tettigoniids are found on every continent except Antarctica.[13] The vast majority of katydid species live in the tropical regions of the world.[4] For example, the Amazon basin rain forest is home to over 2,000 species of katydids.[4] However, katydids are found in the cool, dry temperate regions, as well, with about 255 species in North America.

The Tettigoniidae are a large family and have been divided into a number of subfamilies:[1]

The genus †Triassophyllum is extinct and may be placed here or in the Archaeorthoptera.[15]

The diet of most tettigoniids includes leaves, flowers, bark, and seeds, but many species are exclusively predatory, feeding on other insects, snails, or even small vertebrates such as snakes and lizards. Some are also considered pests by commercial crop growers and are sprayed to limit growth, but population densities are usually low, so a large economic impact is rare.[16]

Tettigoniids are serious insect pests of karuka (Pandanus julianettii).[17] The species Segestes gracilis and Segestidea montana eat the leaves and can sometimes kill trees.[17] Growers will stuff leaves and grass in between the leaves of the crown to keep insects out.[17]

By observing the head and mouthparts, where differences can be seen in relation to function, it is possible to determine what type of food the tettigoniids consume. Large tettigoniids can inflict a painful bite or pinch if handled, but seldom break the skin.

Some species of bush crickets are consumed by people, such as the nsenene (Ruspolia differens) in Uganda and neighbouring areas.

The males of tettigoniids have sound-producing organs located on the hind angles of their front wings. In some species, females are also capable of stridulation. Females chirp in response to the shrill of the males. The males use this sound for courtship, which occurs late in the summer.[18] The sound is produced by rubbing two parts of their bodies together, called stridulation. In many cases this is done with the wings, but not exclusively. One body part bears a file or comb with ridges; the other has the plectrum, which runs over the ridges to produce a vibration.[19] For tettigoniids, the fore wings are used to sing. Tettigoniids produce continuous songs known as trills. The size of the insect, the spacing of the ridges, and the width of the scraper all influence what sound is made.[20]

Some tettigoniids have spines on different parts of their bodies that work in different ways. The Listroscelinae have limb spines on the ventral surfaces of their bodies. This works in a way to confine their prey to make a temporary cage above their mouthparts. The spines are articulated and comparatively flexible, but relatively blunt. Due to this, they are used to cage and not penetrate the prey's body. Spines on the tibiae and the femora are usually more sharp and nonarticulated. They are designed more for penetration or help in the defensive mechanism they might have. This usually works with their diurnal roosting posture to maximize defense and prevent predators from going for their head.[22] 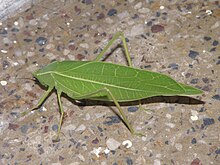 Katydid mimicking a leaf
A Meadow Katydids in Hawaii

When tettigoniids go to rest during the day, they enter a diurnal roosting posture to maximize their cryptic qualities. This position fools predators into thinking the katydid is either dead or just a leaf on the plant. Various tettigoniids have bright coloration and black apical spots on the inner surfaces of the tegmina, and brightly colored hind wings. By flicking their wings open when disturbed, they use the coloration to fool predators into thinking the spots are eyes. This, in combination with their coloration mimicking leaves, allows them to blend in with their surroundings, but also makes predators unsure which side is the front and which side is the back.[23]

The Tettigoniidae have polygamous relationships. The first male to mate is guaranteed an extremely high confidence of paternity when a second male couples at the termination of female sexual refractoriness. The nutrients that the offspring ultimately receive will increase their fitness. The second male to mate with the female at the termination of her refractory period is usually cuckolded.[25]

The polygamous relationships of the Tettigoniidae lead to high levels of male-male competition. Male competition is caused by the decreased availability of males able to supply nutritious spermaphylanges to the females. Females produce more eggs on a high-quality diet; thus, the female looks for healthier males with a more nutritious spermatophylax. Females use the sound created by the male to judge his fitness. The louder and more fluent the trill, the higher the fitness of the male.[26]

Oftentimes in species which produce larger food gifts, the female seeks out the males to copulate. This, however, is a cost to females as they risk predation while searching for males. Also, a cost-benefit tradeoff exists in the size of the spermatophore which the male tettigoniids produce. When males possess a large spermatophore, they benefit by being more highly selected for by females, but they are only able to mate one to two times during their lifetimes. Inversely, male Tettigoniidae with smaller spermatophores have the benefit of being able to mate two to three times per night, but have lower chances of being selected by females. Even in times of nutritional stress, male Tettigoniidae continue to invest nutrients within their spermatophores. In some species, the cost of creating the spermatophore is low, but even in those which it is not low, it is still not beneficial to reduce the quality of the spermatophore, as it would lead to lower reproductive selection and success. This low reproductive success is attributed to some Tettigoniidae species in which the spermatophylax that the female receives as a food gift from the male during copulation increases the reproductive output of the reproduction attempt. However, in other cases, the female receives few, if any, benefits.[27]

The reproductive behavior of bush crickets has been studied in great depth. Studies found that the tuberous bush cricket (Platycleis affinis) has the largest testes in proportion to body mass of any animal recorded. They account for 14% of the insect's body mass and are thought to enable a fast remating rate.[28]