Species of bird
For the short story by Sarah Orne Jewett, see A White Heron.
Not to be confused with the all-white population of the great blue heron.

The great egret (Ardea alba), also known as the common egret, large egret, or (in the Old World) great white egret[2] or great white heron[3][4][5] is a large, widely distributed egret, with four subspecies found in Asia, Africa, the Americas, and southern Europe, recently also spreading to more northern areas of Europe. Distributed across most of the tropical and warmer temperate regions of the world, it builds tree nests in colonies close to water.

Like all egrets, it is a member of the heron family, Ardeidae. Traditionally classified with the storks in the Ciconiiformes, the Ardeidae are closer relatives of pelicans and belong in the Pelecaniformes, instead. The great egret—unlike the typical egrets—does not belong to the genus Egretta, but together with the great herons is today placed in Ardea. In the past, however, it was sometimes placed in Egretta or separated in a monotypic genus Casmerodius.

The Old World population is often referred to as the "great white egret". This species is sometimes confused with the great white heron of the Caribbean, which is a white morph of the closely related great blue heron.

Four subspecies are found in various parts of the world, which differ but little.[7] Differences among them include bare-part coloration in the breeding season and size. The smallest subspecies, A. a. modesta, is from Asia and Australasia and some taxonomists consider it to be a full species, the eastern great egret (Ardea modesta), but most scientists treat it as a subspecies. 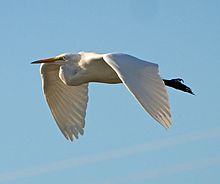 The great egret is a large heron with all-white plumage. Standing up to 1 m (3.3 ft) tall, this species can measure 80 to 104 cm (31 to 41 in) in length and have a wingspan of 131 to 170 cm (52 to 67 in).[8][9] Body mass can range from 700 to 1,500 g (1.5 to 3.3 lb), with an average around 1,000 g (2.2 lb).[10] It is thus only slightly smaller than the great blue or grey heron (A. cinerea). Apart from size, the great egret can be distinguished from other white egrets by its yellow bill and black legs and feet, though the bill may become darker and the lower legs lighter in the breeding season. In breeding plumage, delicate ornamental feathers are borne on the back. Males and females are identical in appearance; juveniles look like nonbreeding adults. Differentiated from the intermediate egret (Mesophoyx intermedius) by the gape, which extends well beyond the back of the eye in case of the great egret, but ends just behind the eye in case of the intermediate egret.

It has a slow flight, with its neck retracted. This is characteristic of herons and bitterns, and distinguishes them from storks, cranes, ibises, and spoonbills, which extend their necks in flight. The great egret walks with its neck extended and wings held close. The great egret is not normally a vocal bird; it gives a low, hoarse croak when disturbed, and at breeding colonies, it often gives a loud croaking cuk cuk cuk and higher-pitched squawks.[11]

Adult sitting on a bridge in California

The great egret is generally a very successful species with a large and expanding range, occurring worldwide in temperate and tropical habitats. It is ubiquitous across the Sun Belt of the United States and in the Neotropics.[1]

In North America, large numbers of great egrets were killed around the end of the 19th century so that their plumes, known as "aigrettes", could be used to decorate hats.[13][14] Numbers have since recovered as a result of conservation measures. Its range has expanded as far north as southern Canada. However, in some parts of the southern United States, its numbers have declined due to habitat loss, particularly wetland degradation through drainage, grazing, clearing, burning, increased salinity, groundwater extraction and invasion by exotic plants. Nevertheless, the species adapts well to human habitation and can be readily seen near wetlands and bodies of water in urban and suburban areas.[1]

The great egret is partially migratory, with northern hemisphere birds moving south from areas with colder winters. It is one of the species to which the Agreement on the Conservation of African-Eurasian Migratory Waterbirds (AEWA) applies.[citation needed]

In 1953, the great egret in flight was chosen as the symbol of the National Audubon Society, which was formed in part to prevent the killing of birds for their feathers.[15][16]

On 22 May 2012, a pair of great egrets was announced to be nesting in the UK for the first time at the Shapwick Heath nature reserve in Somerset.[17] The species was a rare visitor to the UK and Ben Aviss of the BBC stated that the news could mean the UK's first great egret colony had become established.[17][18] The following week, Kevin Anderson of Natural England confirmed a great egret chick had hatched, making it a new breeding bird record for the UK.[19] In 2017, seven nests in Somerset fledged 17 young,[20] and a second breeding site was announced at Holkham National Nature Reserve in Norfolk where a pair fledged three young.[21] In January 2021, Bird Guides, a UK website and magazine which reports sightings of rare birds, dropped the species from its list of nationally rare birds because sightings had become so numerous.[22]

A similar move northwards has been observed in the Nordic countries where historically it only was a rare visitor. The first confirmed breeding in Sweden was 2012 and in Denmark in 2014, and both countries now have small colonies.[23][24] In 2018, a pair of great egrets nested in Finland for the first time, raising four young in a grey heron colony in Porvoo.[25]

The species breeds in colonies in trees close to large lakes with reed beds or other extensive wetlands, preferably at height of 10–40 feet (3.0–12.2 m).[11] It begins to breed at 2–3 years of age by forming monogamous pairs each season. Whether the pairing carries over to the next season is not known. The male selects the nest area, starts a nest, and then attracts a female. The nest, made of sticks and lined with plant material, could be up to 3 feet across. Up to six bluish green eggs are laid at one time. Both sexes incubate the eggs, and the incubation period is 23–26 days. The young are fed by regurgitation by both parents and are able to fly within 6–7 weeks.[26] 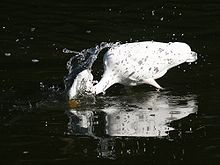 The great egret forages in shallow water or in drier habitats, feeding mainly on fish, frogs, other amphibians,[27] small mammals (such as mice),[28] and occasionally small reptiles (such as snakes),[28] crustaceans (such as crayfish)[29] and insects (such as crickets and grasshoppers).[28] This species normally impales its prey with its long, sharp bill by standing still and allowing the prey to come within the striking distance of its bill, which it uses as a spear. It often waits motionless for prey or slowly stalks its victim.

The great egret is depicted on the reverse side of a 5-Brazilian reais banknote.[31]

The great egret is the symbol of the National Audubon Society.[32]

An airbrushed photograph of a great egret in breeding plumage by Werner Krutein is featured in the cover art of the 1992 Faith No More album Angel Dust.[33]

In Belarus, a commemorative coin has the image of a great egret.[34] The great egret also features on the New Zealand $2 coin and on the Hungarian 5-forint coin.[35]