These look like tiny bamboo tree trunks, and I’ve seen them infrequently, but up and down the US east coast, as well as in Florida. Like ferns, they reproduce with spores instead of seeds.

Species of vascular plant in the horsetail family Equisetaceae

Equisetum hyemale (commonly known as rough horsetail,[1] scouring rush, scouringrush horsetail and, in South Africa, as snake grass) is a perennial herbaceous vascular plant in the horsetail family Equisetaceae. It is a native plant throughout the Holarctic Kingdom, found in North America, Europe, and northern Asia.

In nature Equisetum hyemale grows in mesic (reliably moist) habitats, often in sandy or gravelly areas. It grows from between sea level to 2,530 metres (8,300 ft) in elevation.[2]

It is primarily found in wetlands, and in riparian zones of rivers and streams where it can withstand seasonal flooding.[2] It is also found around springs and seeps, and can indicate their presence when not flowing. Other habitats include moist forest and woodland openings, lake and pond shores, ditches, and marshes and swamps. 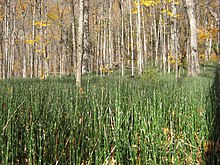 Equisetum hyemale has vertical jointed reed-like stalks of medium to dark green. The hollow stems are up to 3 feet (0.91 m) in height. The stems are seldom branched. The stems themselves have conspicuous ridges, which are impregnated with silica. This makes the ridges feel rough and harsh.[3][4]

The tiny leaves are joined together around the stem, forming a narrow black-green band or sheath at each joint. Like other ferns and their relatives, the plant reproduces by spores and does not produce flowers or seeds.[3]

The stems are generally deciduous in cold climates,[5] and remain during winter in warmer climates. It forms dense spreading colonies, in full to partial sun.

Linnaeus was the first to describe scouring rush with the binomial Equisetum hyemale in his Species Plantarum of 1753.[6]

Two Equisetum plants are sold commercially under the names Equisetum japonicum (barred horsetail) and Equisetum camtschatcense (Kamchatka horsetail). These are both types of E. hyemale var. hyemale, although they may also be listed as varieties of E. hyemale.

The rough stems have been used to scour or clean pots, and used as sandpaper.[9][10]

Boiled and dried Equisetum hyemale is used as traditional polishing material, similar to a fine grit sandpaper, in Japan. 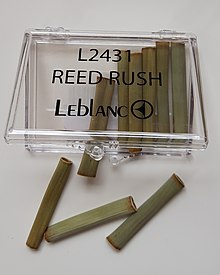 The stems are used to shape the reeds of reed instruments such as clarinets or saxophones.

Some Plateau Indian tribes boiled the stalks to produce a drink used as a diuretic and to treat venereal disease.[11]

It is used as a homeopathic remedy.[3]

Equisetum hyemale cultivated as an ornamental plant, for use in contained garden beds and planters, and in pots. It is a popular "icon plant" in contemporary Modernist and Asian style garden design. Its tight verticality fits into narrow planting spaces between walkways and walls, and on small balconies.

It is also used as an accent plant in garden ponds and ornamental pools, and other landscape water features, planted in submerged pots.

The plant is sometimes sold in the nursery trade as "barred horsetail" or "Equisetum japonicum", but is different in appearance than Equisetum ramosissimum var. Japonicum.

In South Africa and Australia, the plant is an invasive species of moist natural habitats.[12]