We don’t see these often around Sarasota, but keep an eye out further south along the barrier islands.

The magnificent frigatebird (Fregata magnificens) is a seabird of the frigatebird family Fregatidae. With a length of 89–114 centimetres (2 ft 11 in – 3 ft 9 in) and wingspan of 2.17–2.44 m (7 ft 1 in – 8 ft 0 in) it is the largest species of frigatebird. It occurs over tropical and subtropical waters off America, between northern Mexico and Perú on the Pacific coast and between Florida and southern Brazil along the Atlantic coast.[1] There are also populations on the Galápagos Islands in the Pacific and the Cape Verde islands in the Atlantic.

The magnificent frigatebird is a large, lightly built seabird with brownish-black plumage, long narrow wings and a deeply forked tail. The male has a striking red gular sac which he inflates to attract a mate. The female is slightly larger than the male and has a white breast and belly. Frigatebirds feed on fish taken in flight from the ocean's surface (often flying fish), and sometimes indulge in kleptoparasitism, harassing other birds to force them to regurgitate their food.

There are two subspecies:

Prior to 2022, both these subspecies were considered synonymous with one another and grouped under F. m. magnificens. However, they were split by the International Ornithological Congress in 2022 based on a 2011 study which examined genetic and morphological variation in magnificent frigatebirds, finding both expected and also highly unexpected results. As predicted by the flight capacity of the species, the authors found signatures of high gene flow across most of the distribution range. This included evidence of recent gene flow among Pacific and Atlantic localities, likely across the Isthmus of Panama. This geological formation is a strong barrier to movement in most tropical seabirds. However, the same study also found that the magnificent frigatebird on the Galápagos Islands is genetically and morphologically distinct. Based on this study, the Galápagos population has not been exchanging any genes with their mainland counterparts for several hundred thousand years.[4]

Christopher Columbus encountered magnificent frigatebirds when passing the Cape Verde Islands on his first voyage across the Atlantic in 1492. His journal for the voyage survives in a version made in the 1530s by Bartolomé de las Casas.[5] The entry for 29 September reads in English:

They saw a bird that is called a frigatebird, which makes the boobies throw up what they eat in order to eat it herself, and she does not sustain herself on anything else. It is a seabird, but does not alight on the sea nor depart from land 20 leagues [97 km; 60 mi]. There are many of these on the islands of Cape Verde.[6]

In the 15th century text the name of the bird is written as rabiforçado. The modern Spanish word for a frigatebird is rabihorcado or "forked tail".[5][6] A population of magnificent frigatebirds once bred on the Cape Verde Islands but is now probably extinct.[7]

The word frigatebird derives from the French mariners' name for the bird La Frégate - a frigate or fast warship.[8] The etymology of the name was given by French naturalist Jean-Baptiste du Tertre when describing the magnificent frigatebird in 1667.[9][a] English mariners referred to frigatebirds as Man-of-War birds. This name was used by the English explorer William Dampier in his book An Account of a New Voyage Around the World published in 1697:[10]

The Man-of-War (as it is called by the English) is about the bigness of a Kite, and in shape like it, but black; and the neck is red. It lives on Fish yet never lights on the water, but soars aloft like a Kite, and when it sees its prey, it flys down head foremost to the Waters edge, very swiftly takes its prey out of the Sea with his Bill, and immediately mounts again as swiftly; never touching the Water with his Bill. His Wings are very long; his feet are like other Land-fowl, and he builds on Trees, where he finds any; but where they are wanting on the ground.[10]

The modern name Frigate Bird was used in 1738 by the English naturalist and illustrator Eleazar Albin in his A Natural History of the Birds. The book included an illustration of the male bird showing the red gular pouch.[11] Like the genus name, the English term is derived from the French mariners' name for the bird la frégate—a frigate or fast warship.[12]

The genus name, Fregata has the same source as the English term, and magnificens is Latin for "splendidly", from magnificus, "grand".[8]

The magnificent frigatebird is widespread in the tropical Atlantic, breeding colonially in trees in Florida, the Caribbean and also along the Pacific coast of the Americas from Mexico to Ecuador, including the Galápagos Islands.

It has occurred as a vagrant as far from its normal range as the Isle of Man, Denmark, Spain, England, Nova Scotia, the Magdalen Islands, and British Columbia.

The magnificent frigatebird is the largest species of frigatebird. It measures 89–114 cm (2 ft 11 in – 3 ft 9 in) in length, has a wingspan of 2.17–2.44 m (7 ft 1 in – 8 ft 0 in) and weighs 1.1–1.59 kilograms (2 lb 7 oz – 3 lb 8 oz).[13] Males are all-black with a scarlet throat pouch that is inflated like a balloon in the breeding season. Although the feathers are black, the scapular feathers produce a purple iridescence when they reflect sunlight, in contrast to the male great frigatebird's green sheen. Females are black but have a white breast and lower neck sides, a brown band on the wings, and a blue eye-ring that is diagnostic of the female of the species. Immature birds have a white head and underparts.

This species is very similar to the other frigatebirds and is similarly sized to all but the lesser frigatebird. However, it lacks a white axillary spur, and juveniles show a distinctive diamond-shaped belly patch. The magnificent frigatebird is silent in flight, but makes various rattling sounds at its nest. 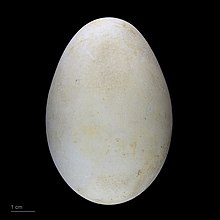 This bird makes a shallow platform nest on top of both trees and bushes on islands and cays with mangroves. This nest is constructed out of branches and twigs.[16]

The magnificent frigatebird lays a clutch of one clear white egg that measures 68 by 47 millimetres (2+3⁄4 by 1+3⁄4 in) on average. This egg is incubated by both sexes for a period of 50 to 60 days. After the egg hatches, the male parent will abandon it, with the female staying to provision for the young for almost a year.[16]

It is a kleptoparasite, pecking at other seabirds to force them to disgorge their meals. After forcing the other seabird to regurgitate its meal, the magnificent frigatebird will dive and catch the prey before it hits the surface of the water.[16]

This population on Cape Verde is thought to be extremely low and on the brink of extinction, despite the original sighting of this species by Columbus likely being that of the Cape Verde population. Protection of the frigatebird's breeding sites is necessary for the species' recovery.[19]