The oak toad (Anaxyrus quercicus) is a species of toad in the family Bufonidae. It is endemic to the coastal regions of southeastern United States.[2][3] It is regarded as the smallest species of toad in North America, with a length of 19 to 33 mm (0.75 to 1.30 in).[3]

The oak toad can be identified by its light mid-dorsal stripe, variable brown and black spots, and proportionally large parotoid glands. One of the most remarkable features of this species is its small adult size relative to other toads.

The male can be distinguished from the female by its clear white belly and a slightly distended, loose flap of skin beneath the mouth, which expands into the vocal sac. The female has a dark-spotted belly and lacks a vocal sac.

The toad's range extends across the coastal plains of the southeastern United States from eastern Louisiana to southeast Virginia and south throughout Florida.[4]

The oak toad eats mainly small insects and other arthropods. The adult has a strong preference for ants.[5]

It is mostly diurnal and spends much of its time burrowed into the loose soil of its habitat. It may remain in its burrow during the winter, often in hibernation.[5]

An average of 300–500 eggs are laid in short strands of 3 to 8 eggs each, with each egg about a millimeter wide.[5] The strands are attached to vegetation, usually submerged blades of grass 4 to 12 cm (1.6 to 4.7 in) beneath the surface.[9][10] Energy investment in producing this quantity of eggs is significant, and many females are found dead during the mating season due to the rigors of the process. Fertilization takes place externally, with sperm being released in the vicinity of the eggs. As with other species of toad, the male oak toad has a Bidder's organ, which can become a functional ovary in the event of testicular malfunction.[11][12]

The length of the lifespan is unclear.[3] There are records of specimens living for four years in captivity,[9][11] and the reported average lifespan in captivity is 1.9 years.[13]

The primary predators of the oak toad are snakes, particularly hognosed snakes, which are specialized for eating toads. Other predators include garter snakes and gopher frogs.[11][14]

As with many bufonids, the oak toad inflates its body in unkenreflex when confronted by a potential predator. It secretes toxins from its parotoid glands and urinates when threatened. The male may chirp as a response to predators. Eggs also appear to have some toxic properties.[5] 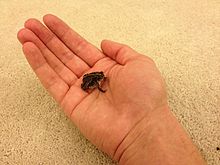