The reddish egret (Egretta rufescens) is a medium-sized heron. It is a resident breeder in Central America, The Bahamas, the Caribbean, the Gulf Coast of the United States, and Mexico.[2] There is post-breeding dispersal to well north of the nesting range. In the past, this bird was a victim of the plume trade.

According to the Texas Parks and Wildlife Department, there are only 1,500 to 2,000 nesting pairs of reddish egrets in the United States — and most of these are in Texas.[3] They are classified as "threatened" in Texas and receive special protection.

The reddish egret was formally described in 1789 by the German naturalist Johann Friedrich Gmelin in his revised and expanded edition of Carl Linnaeus's Systema Naturae. He placed it with the herons, cranes and egrets in the genus Ardea and coined the binomial name Ardea rufescens.[4] Gmelin based his description on that of the English ornithologist John Latham who in 1785 had included the species in his multi-volume A General Synopsis of Birds.[5] Latham had in turn based his own description on the "L'Aigrette rousse, de la Louisiane" that the French polymath Comte de Buffon had described and illustrated in his Histoire Naturelle des Oiseaux.[6][7] The reddish egret is now placed with 12 other species in the genus Egretta that was introduced in 1817 by the German naturalist Johann Reinhold Forster.[8][9] The genus name comes from the Provençal French word for the little egret, aigrette, a diminutive of aigron, "heron". The specific epithet rufescens is Latin meaning "reddish".[10] 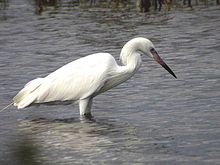 The reddish egret is considered one of the most active herons, and is often seen on the move. It stalks its prey visually in shallow water far more actively than other herons and egrets, frequently running energetically and using the shadow of its wings to reduce glare on the water once it is in position to spear a fish; the result is a fascinating dance. Due to its bold, rapacious yet graceful feeding behavior, author Pete Dunne nicknamed the reddish egret "the Tyrannosaurus rex of the Flats".[14] It eats fish, frogs, crustaceans, and insects.

Reddish egrets' breeding habitat is tropical swamps. It nests in colonies, often with other herons, usually on platforms of sticks in trees or shrubs. These colonies are usually located on coastal islands. These birds have raucous courtship displays. They generally involve shaking of the head during the greeting ceremony, followed by chases and circle flights. They also involve raising of the neck, back and crest feathers, accompanied by bill clacking, similar to the tricolored heron.