The North American river otter, a member of the subfamily Lutrinae in the weasel family (Mustelidae), is equally versatile in the water and on land. It establishes a burrow close to the water's edge in river, lake, swamp, coastal shoreline, tidal flat, or estuary ecosystems. The den typically has many tunnel openings, one of which generally allows the otter to enter and exit the body of water. Female North American river otters give birth in these burrows, producing litters of one to six young.[2]

North American river otters, like most predators, prey upon the most readily accessible species. Fish is a favored food among the otters, but they also consume various amphibians (such as salamanders and frogs[3]), freshwater clams, mussels, snails, small turtles and crayfish. The most common fish consumed are perch, suckers, and catfish.[4] Occasional reports also show the river otter eating other small animals, such as mice, squirrels, birds, and even dogs that they've attacked and drowned.[5][6][7]

The range of the North American river otter has been significantly reduced by habitat loss, beginning with the European colonization of the Americas. In some regions, though, their population is controlled to allow the trapping and harvesting of otters for their fur. North American river otters are very susceptible to the effects of environmental pollution, which is a likely factor in the continued decline of their numbers. A number of reintroduction projects have been initiated to help halt the reduction in the overall population.[8]

In a new classification, the species is called Lontra canadensis, where the genus Lontra includes all the New World river otters.[12]

Molecular biological techniques have been used to determine when the river otter and the giant otter (Pteronura brasiliensis) of South America diverged. These analyses suggest they diverged in the Miocene epoch 23.03 to 5.33 million years ago (Mya), which is "much earlier" than indicated in the fossil record.[13] Fossils of a giant river otter dating back 3.5 Mya (during the Pliocene)[14] have been found in the US Midwest; however, fossils of the modern river otter did not appear in North America until about 1.9 Mya.[15][16] The New World river otters originated from the Old World river otters following a migration across the Bering Land Bridge, which existed off and on between 1.8 million and 10,000 years ago. This means they likely arrived in the Americas at a similar time as humans[17], meaning humans were an important part of their natural ecosystem from the moment otters arrived. The otters migrated to North America and southwards again across the Panamanian Land Bridge, which formed 3 Mya.[10] 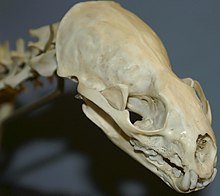 The North American river otter's streamlined shape allows it to glide through the water.

The North American river otter has long whiskers that are used to detect prey in dark waters.[19] An average adult male weighs about 11.3 kilograms (25 lb) against the female's average of 8.3 kilograms (18 lb). Its body length ranges from 66 to 107 centimetres (26 to 42 in).[20] About one-third of the animal's total length consists of a long, tapered tail.[16] Tail lengths range from 30 to 50 centimetres (12 to 20 in).[20] Large male North American river otters can exceed a weight of 15 kilograms (33 lb).[21] It differs from the European otter by its longer neck, narrower visage, the smaller space between the ears and its shorter tail.[22]

Its whiskers (vibrissae) are long and thick, enhancing their senses.[16] 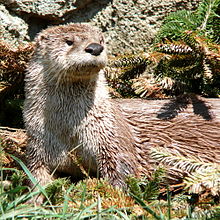 Most mustelids, including otters, have 36 specialized teeth, including sharp canines and carnassials that inflict lethal bites to prey. Also, North American river otters have large molars used for crushing hard objects, such as the shells of molluscs.[26] Additional premolars may be present.[16] The dental formula is 3.1.4.13.1.3.2.

Sliding across ice is an efficient means of travel. Note the long, tapered tail.

Tracks in the snow

A highly active predator, the North American river otter has adapted to hunting in water, and eats aquatic and semiaquatic animals. The vulnerability and seasonal availability of prey animals mainly governs its food habits and prey choices.[28] This availability is influenced by the following factors: detectability and mobility of the prey, habitat availability for the various prey species, environmental factors, such as water depth and temperature, and seasonal changes in prey supply and distribution in correspondence with otter foraging habitat.[29][30]

When left unchecked, though, otters can be significant predators under certain circumstances (e.g. in hatcheries or other fish culture facilities). Likewise, the potential predatory impact of otters may be considerable whenever fish are physically confined (most commonly in smaller ponds offering sparse cover or other escape options). To protect fish in these cases, the otters may need to be removed or relocated. Even in larger bodies of water, river otters may take disproportional advantage of any seasonal concentrations of fish when and where only very limited areas of suitable spawning, low-flow, or over-wintering habitat may exist. Even fast-swimming fish like trout slow down in extremely cold water, leaving them vulnerable. As such, careful consideration of any threatened, endangered, or fish species of special interest is warranted prior to reintroduction of otters to a watershed.[26]

Male North American river otters disperse from such family groups more often than females. When females leave, they tend to move much further away (60–90 km or 37–56 mi) than males (up to 30 km or 19 mi), which tend to move shorter distances. Male North American river otters do not seem to be territorial, and newly dispersing males may join established male groups.[41]

Delayed implantation distinguishes the species from the European otter, which does not do this.[42][43]

In early spring, expectant mothers begin to look for a den where they can give birth. The female otters do not dig their own dens; instead, they rely on other animals, such as beavers, to provide suitable environments to raise their offspring. When the mothers have established their domains, they give birth to several kits.[20] Litter size can reach five, but usually ranges from one to three.[16] Each otter pup weighs approximately five ounces.[20]

The species inhabits coastal areas, such as marshland

However, urbanization and pollution instigated reductions in range area.[1] They are now absent or rare in Arizona, Kansas, Nebraska, New Mexico, North Dakota, Ohio, Oklahoma, South Dakota, Tennessee, and West Virginia. Reintroduction projects have expanded their distribution in recent years, especially in the Midwestern United States. Since their reintroduction to Kentucky in the early 90s, they have recovered to the point that a trapping season was started in 2006, and the species is now found in all major waterways.[45] In 2010, the Colorado Department of Wildlife reported the species, reintroduced in the 1980s, was "thriving" and recommended its protection status be reconsidered.[46] In late 2012, a river otter nicknamed Sutro Sam took up residence around the former site of the Sutro Baths in San Francisco, the first river otter sighting in that city in more than half a century.[47] In Canada, North American river otters occupy all provinces and territories, except until recently Prince Edward Island.[1] Otters have recently re-established themselves on Prince Edward Island.[48]

A North American river otter in the San Anselmo Creek

Although commonly called a "river otter", the North American river otter is found in a wide variety of aquatic habitats, both freshwater and coastal marine, including lakes, rivers, inland wetlands, coastal shorelines, marshes, and estuaries. It can tolerate a great range of temperature and elevations. A North American river otter's main requirements are a steady food supply and easy access to a body of water. However, it is sensitive to pollution, and will disappear from tainted areas.[23]

Like other otters, the North American river otter lives in a holt, or den, constructed in the burrows of other animals, or in natural hollows, such as under a log or in river banks. An entrance, which may be under water or above ground, leads to a nest chamber lined with leaves, grass, moss, bark, and hair.[23] 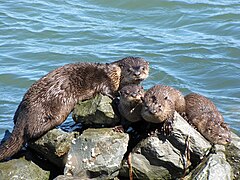 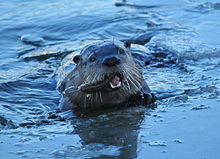 During the winter and spring, when the water levels were higher, North American river otters had a greater tendency to prey upon crayfish (73% of scats had crayfish remains) rather than fish.[54] However, when water levels are lower, crayfish will seek out shelter while fish become more highly concentrated and susceptible to predation. Therefore, fish are more vulnerable to being preyed upon by otters because the crayfish have become more difficult to obtain.[29]

Amphibians and reptiles are more obtainable by the North American river otter during the spring and summer as a result of breeding activity, appropriate temperatures, and water supply for the prey.[54]

Waterfowl, rails, and some colonial nesting birds are preyed upon by North American river otters in various areas.[32][50] Susceptibility of these species is greatest during the summer (when waterfowl broods are vulnerable) and autumn.[32] The North American river otters have also been known to catch and consume moulting American wigeon (Mareca americana) and green-winged teal (Anas crecca).[34] Other species of birds found within their diets include: northern pintail (Anas acuta); mallard (Anas platyrhynchos); canvasback (Aythya valisineria); ruddy duck (Oxyura jamaicensis); and the American coot (Fulica americana).[33]

Although they consume birds, North American river otters do not feed on bird eggs.[28]

Aquatic invertebrates have been recognized as an integral part of the North American river otter's diet.[26][34][36][50] Otters consume more aquatic insects in the summer as the populations increase and specific life stages heighten their susceptibility.[34] Most aquatic invertebrates preyed upon by the otters are from the families Odonata (dragonfly nymphs), Plecoptera (stonefly nymphs), and Coleoptera (adult beetles).[34][50] Invertebrates discovered within scats or digestive tracts could most likely be a secondary food item, first being consumed by the fish that are subsequently preyed upon by the North American river otters.[31][33]

Cases where otters have been ambushed and consumed by grizzly bears (Ursus arctos horribilis) and polar bears (Ursus maritimus) have also been reportedly witnessed near the Arctic region.[58][59][37][60] 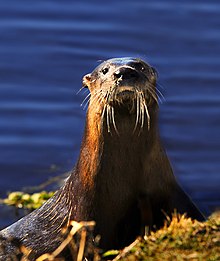 Lontra canadensis is listed in Appendix II of the Convention on International Trade in Endangered Species of Wild Fauna and Flora (CITES). They have been virtually eliminated through many parts of their range, especially around heavily populated areas in the midwestern and eastern United States.[61] Appendix II lists species that are not necessarily threatened with extinction currently, but may become so unless trade is closely controlled.[62]

The North American river otter is considered a species of least concern according to the IUCN Red List, as it is not currently declining at a rate sufficient for a threat category. By the early 1900s, North American river otter populations had declined throughout large portions of their historic range in North America. However, improvements in water quality (through enactment of clean water regulations) and furbearer management techniques have permitted river otters to regain portions of their range in many areas. Reintroduction projects have been particularly valuable in restoring populations in many areas of the United States. However, North American river otters remain rare or absent in the southwestern United States. Water quality and development inhibit recovery of populations in some areas. The species is widely distributed throughout its range. In many places, the populations have re-established themselves because of conservation initiatives. Reintroduction of river otters may present a problem in that it may contaminate the genetic structure of the native population.[1]